Today, I came across a mobile application. It seemed rather new to me, but it turns out they’re leaving their third year behind. The idea is to collect barometer data, creating a “high resolution pressure map”. It goes with the title “The weather’s future.”

Manufacturers started adding barometers to their devices to improve GPS accuracy and altitude detection. These Canadian Developers, alongside scientists from University of Washington, came up with a great idea. They realized they can use barometer data from millions of devices to reshape weather forecasting.

Currently, they get 4 million reads in one day. Only a few specific devices have the barometer. For example, Apple smartphones did not have the equipment until iPhone 6. Having said that, you can install the app to devices without barometers. You can read the pressure data,. You can also share the actual weather: that’s another part of the application. Users can share current weather status (windy, cloudy, rainy) to the others.

Installing a new weather station is very expensive, and the data a station reads is only local. This app is indeed one good solution to this problem. It can be used to produce better forecasts. People with chronic migraine can use the app to be notified about sudden drops in the pressure. Another possible use is thunderstorm prediction, which heavily depends on pressure data. Scientists at Washington University recently published a paper the way they used PressureNet data to predict the weather. 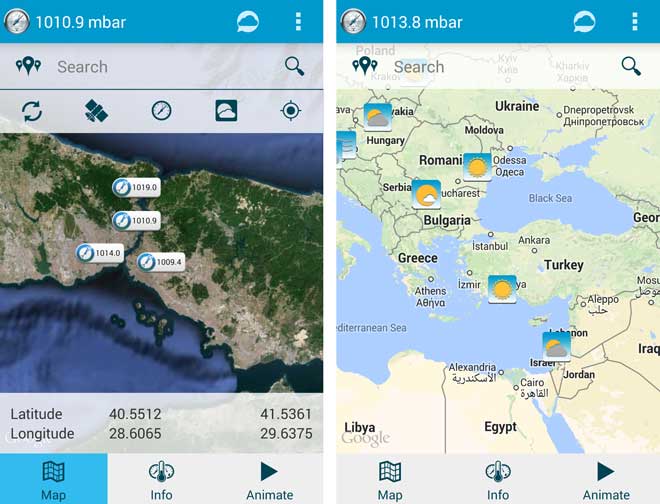 Left: Barometer reads. Only 4 data present in Istanbul (the one near school is me!) Right: Weather shares. Only 1 is present in Turkey, and that's the city of Antalya. Maybe someone wanted to promote how clear the weather is around South.

It’s not available for iOS devices yet, but they must be developing one as Apple started putting barometers. If you have one of the following devices, or their respective upgraded models, you can contribute to science! See the app right here.

Let’s see how all this, and similar crowdsourcing applications, will change the way we live.